Keep up with the latest news coverage of Barbaricum’s work and take advantage of the resources that we’ve developed. 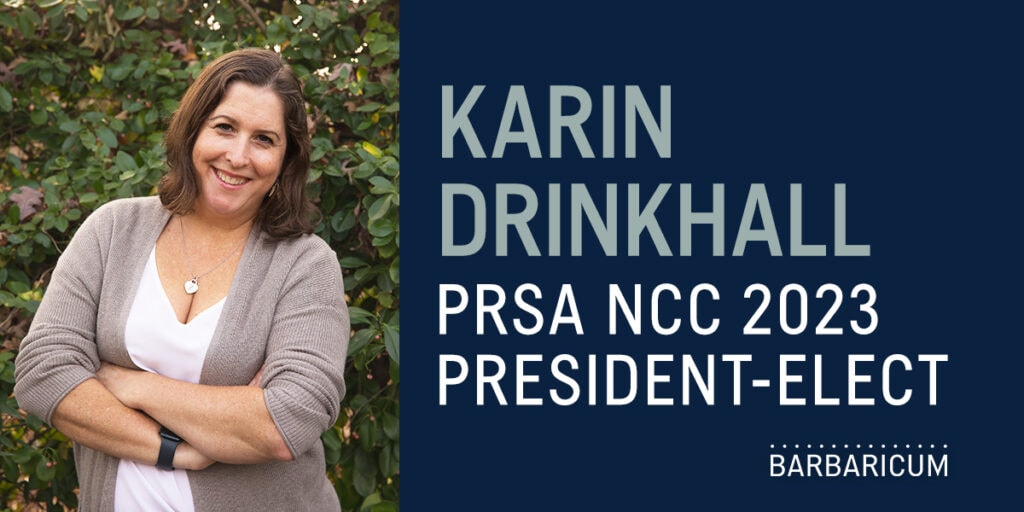 WASHINGTON – December 1, 2022 – The Public Relations Society of America (PRSA) National Capital Chapter (NCC) announced that Karin Drinkhall, Barbaricum’s Deputy Director for Integrated Communications, will be the next President-Elect of its 2023 Board of Directors.

As the nation’s largest and most active Chapter for PRSA, the PRSA NCC 2023 Board of Directors, which is elected by its members, is responsible for setting the Chapter’s strategic direction, overseeing Chapter programming, and cultivating the next generation of communications public relations professionals, as well as he governance and financial oversight of the organization.

“Karin has been a valued member of our team for over a decade,” Barbaricum Partner, Brandon Bloodworth, said. “We are proud to see her setting an example for continued growth and leading the way in strategic communications in our industry and community.”

Karin first became involved in PRSA NCC when she pursued her Accreditation in Public Relations (APR) back in 2012, the same year she joined Barbaricum. Since then, she remains actively involved in the organization, volunteering on the APR Committee for several years before joining the board as Treasurer in 2022.

“I am very excited for this opportunity to increasingly serve PRSA NCC and our professional public relations community in the national capital region,” Karin stated. “The Chapter provides such an integral role for PR professional development and networking in our local area.”

“In leading Barbaricum’s Integrated Communications business practice, it is crucial that I stay on top of Public Relations (PR) industry trends so I can apply best practices and innovative approaches to the work we do in support of the federal government,” Karin explained. “Serving in a leadership position on the PRSA NCC board definitely helps me stay on top of my game in the PR industry, as I’m surrounded by so many talented leaders across the field—government, private sector, non-profit, and agencies—who all bring fresh ideas to the table and keep me sharp. I look forward to seeing what our team accomplishes in the next year.”

Karin has 18 years of experience as a program manager, senior advisor, and tactician in public relations and strategic communications. She has led Integrated Communications projects at Barbaricum for over a decade and oversees a portfolio of federal government contracts for clients such as the Army, Navy, DoD, VA, and DOE. Her teams are recognized routinely with PR industry awards, including PRSA’s Bronze Anvil and Thoth Awards (now National Capital Excellence in Communication Award), Association for the Measurement and Evaluation of Communication (AMEC) Gold and Silver Awards, AVA Digital Award, Gold MARCOM Award, and Hermes Creative Award.

Barbaricum is one of the fastest-growing companies in our market. We support government customers with Cyber / Intel, Integrated Communications, and Mission Support services. Our passion is innovation, and we are committed to client value and effective technical solutions. We are an ISO 9001, ISO 27001, and CMMI Level 3-appraised, Service-Disabled Veteran-Owned Small Business (SDVOSB) located in Washington, D.C., Tampa, FL, Dayton, OH, and Crane, IN. Our mission is to transform U.S. Government approaches to problem sets of increasing complexity by delivering innovative solutions, especially in support of National Security missions.

The company has been recognized by institutions like Inc. Magazine, GovCon, AMEC, PRSA, and SmartCEO for corporate growth, capabilities, and award-winning client work. Our team is dynamic and agile, providing global support to current missions across five continents. We are also focused on developing and maintaining our vibrant corporate culture, having been named a Best Workplace by Inc. Magazine and The Washington Post.

To find out more about Barbaricum please visit our website at https://barbaricum.com.

The PRSA National Capital Chapter (PRSA NCC) is an association of communications professionals in the Metropolitan Washington region. As the largest PRSA chapter in the country, NCC advances the local communications profession by fostering collaboration, enhancing knowledge and skills, and creating connections through robust, up-to-date, and inclusive educational, networking, and professional growth opportunities.